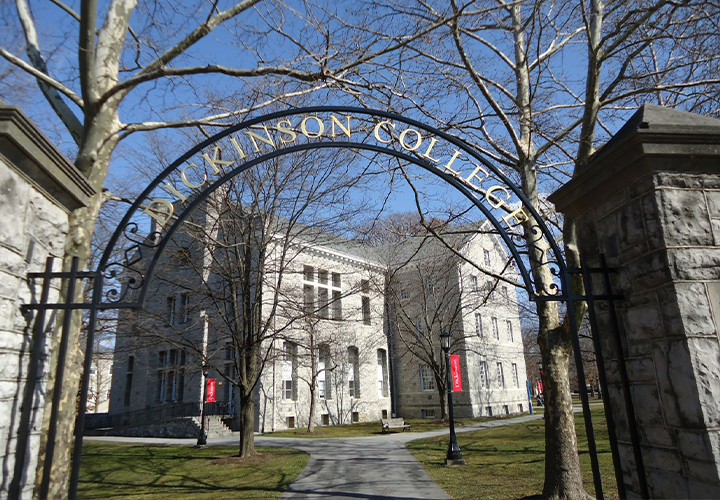 Just days after the end of the Revolutionary War in 1783, Benjamin Rush transformed the town of Carlisle by chartering Dickinson College—the first college founded in the newly independent United States. Rush was a revolutionary, a signer of the Declaration of Independence, who served as the first U.S. surgeon general and who was one of the most prominent and progressive thinkers of his time. From the beginning, Rush wanted to ensure students received a useful education in the arts and sciences that would support the common good of the new nation. This is represented in the college’s seal, which features a liberty cap, a telescope and an open Bible and was designed by Rush and the college’s namesake, John Dickinson, the “penman of the Revolution.”

The college’s commitment to the common good is still evident in its support of sustainability. Year after year, Dickinson earns top marks from publications like The Princeton Review, Sierra magazine, and Sustainable Campus Index—a publication from the Association for the Advancement of Sustainability in Higher Education—which recently ranked Dickinson the No. 2 overall performer in sustainability. In 2020, Dickinson became one of the first colleges in the country to achieve carbon neutrality, delivering on the a commitment the college made in 2008 to reduce its carbon footprint. The college has installed a Tesla-designed, 3-megawatt solar field in Dickinson Park, pledged to make new construction and remodeling projects meet Leadership in Energy and Environmental Design (LEED) standards and reduced its emissions and waste. At the same time, Dickinson has expanded its educational efforts, making sustainability a key part of its curriculum.

Dickinson is also a leader in global education and the only institution to win the prestigious Senator Paul Simon Award for Comprehensive Internationalization twice. The award recognizes Dickinson’s commitment to bringing international scholars and students to Carlisle and to supporting robust study abroad programs. Nearly 60 percent of Dickinson students study abroad. With programs on six continents, Dickinson students can travel and learn in unique locations or study a wide variety of global topics in Carlisle. Dickinson has also been recognized by the U.S. State Department as a top Fulbright scholarship-producing college seven times in the last 10 years.

Dickinson is proud to call Carlisle home. The college’s Center for Civic Learning and Action (CCLA) fosters a deep relationship with the town by listening to and collaborating with community partners. Dickinson has been honored with the Carnegie Foundation’s Community Engagement Classification, a designation indicating institutional commitment to enriching teaching and research while also benefiting the broader community. Additionally, CCLA’s Civic Engagement Fund supports projects promoting civic learning and college-community engagement. More than 250 years after its founding, Dickinson continues to build relationships with its neighbors while looking forward to shared opportunity in the community and beyond.